Before the crypto market crashed early in the week, Litecoin was perhaps one coin that had shown a lot of bullish promise. At the time, LTC had finished a 4-week consolidation phase, and bulls had managed to hold the $51 support. It was only a matter of time before the coin rallied. But this week things have taken a turn for the worse. Here are some of the facts: 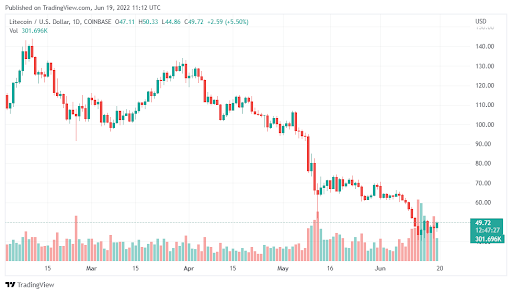 Right now, overall sentiment and trends in the crypto market point toward major losses. The market is in full bear mode, and trade volume has reduced significantly. It’s therefore hard to see any sustained bullish environment. However, there are some positives from an LTC point of view.

First, despite the massive sell-off reported in crypto this week, LTC losses were far lower compared to other major coins. Also, the token has managed to stave off the bears at $41. This shows a lot of resilience.

And besides, LTC has rallied over the last 24 hours with a 10% gain. These conditions suggest that LTC will be able to stay above the $41 support for now. While this may not trigger a decisive bull run in the short term, it could limit further downside.

How to trade LTC for now

So, the key is to give the coin a few days. If bulls are still able to defend $41, then you could buy for the short term.

Ripple (XRP) Price Could Bounce Back Versus Bitcoin (BTC)