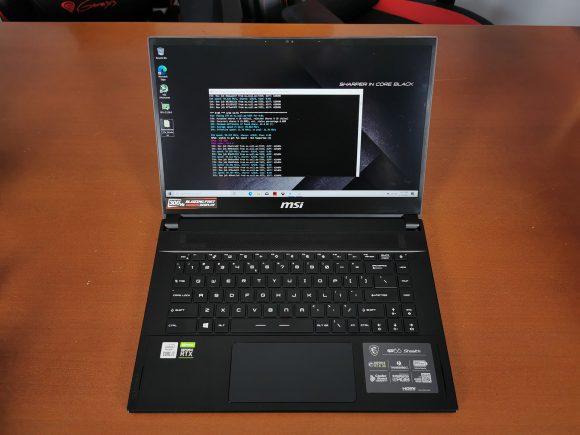 The latest craze in crypto mining is apparently going for gaming laptops that are suitable for mining Ethereum (ETH), so time to play around with one such bad boy and see if it is worth doing it. No wonder people are looking for alternatives with the lack of mining GPUS on the market and the very high prices whenever available. So, we’ll be looking a MSI GS66 Stealth 10UG gaming laptop equipped with Nvidia GeForce RTX 3070 Laptop GPU in order to see what you can really expect in term of mining performance, usability and reliability. The MSI GS66 Stealth 10UG 15.6-inch gaming notebook is equipped with a 10th generation Intel Core i7 CPU and an Nvidia GeForce GTX 3070 Laptop GPU and whole lot of other goodies that frankly we don’t care much about with our focus being mining Ethereum (ETH). We are mostly interested in the GPU and the cooling solution used by MSI in this gaming laptop, as things such as 300Hz LCD refresh rate, RGB gaming keyboard, Killer LAN, Audio by Dynaudio and so on won’t matter much for crypto mining anyway.

– For more details about the MSI GS66 Stealth Gaming Laptop…

Nvidia’s latest GeForce RTX 30 series of GPUs have quickly become the preferred choice for not only gamers, but also for crypto miners due to their high hashrate especially for mining Ethereum (ETH). The combination between a powerful graphics processor, fast GDDR6 or GDDR6X memory and a wide memory bus made them great for mining cryptocurrencies. This is also especially true when you tweak them a bit to run optimized for efficiency (lower power usage and higher mining hashrate). This is one of the main reasons that the desktop variants of the Nvidia GeForce RTX 3060 Ti, GeForce RTX 3070, GeForce RTX 3080 and even GeForce RTX 3090 video cards are hard to find.

With the release of the Nvidia GeForce RTX 30 series Laptop GPUs, the green company has once more hit the jackpot with a great product not only for gamers, but for crypto miners as well (when considering just the performance). The mobile Nvidia RTX 30 series of GPUs include the GeForce RTX 3080 Laptop GPU as the top high-end model, the GeForce RTX 3070 Laptop GPU as the mid-range and the GeForce RTX 3060 Laptop GPU as the lower-end gaming grade solution. The mobile GPUs however are not as powerful as their desktop counterparts as integrating them in a compact laptop chassis and properly cooling them is hard to do if you have 200W-300W or even higher power usage. That is why these Laptop GPUs are a bit stripped down – a bit less CUDA cores and lower operating frequencies and voltages, resulting in significantly lower TDP, while still able to provide you with great performance.

Do note that there is no RTX 3060 Ti mobile version of the RTX 3060 Ti desktop GPU, so while an Nvidia GeForce RTX 3060 Ti can still do 50-60 MH/s, its mobile counterpart will not be as good. The RTX 3060 Laptop GPU is not based on the Ti, but on the normal RTX 3060 desktop. This means that the memory bus is 192-bit and not 256-bit and lower clock speeds, so even lower performance is expected compared to the RTX 3070 Laptop GPU. The same applies for the RTX 3080 Laptop GPU that also features GDDR6 instead of the GDDR6X video memory like the desktop version and has a 256-bit memory bus instead of the 320-bit for the desktop and with the lower clocks its performance for mining Ethereum will most likely not be that much better compared to the RTX 3070 Laptop GPU. With all that said, if you are going for a gaming laptop and plan on using it for crypto mining Ethereum (ETH) your best bet will be the mid-range GeForce RTX 3070 Laptop GPU both in terms of price and in terms of performance! 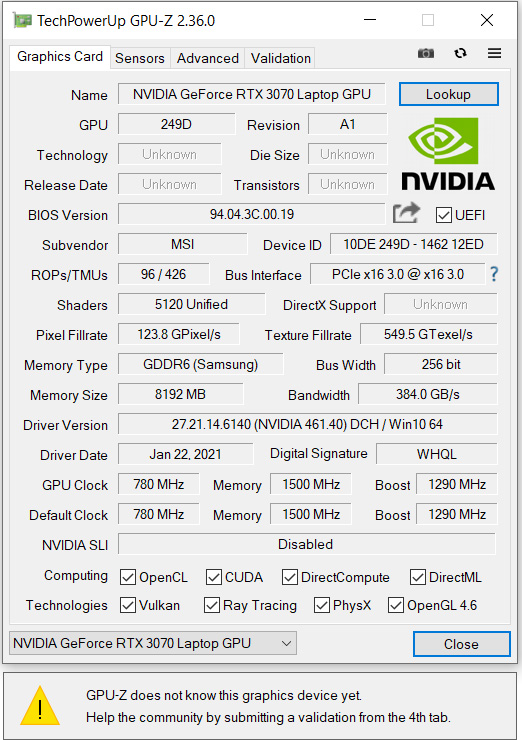 The above specifications are for a reference design RTX 3070 desktop GPU and for the RTX 3070 Laptop GPU used in the MSI GS66 Stealth gaming laptop that we are playing around with for ETH mining here. Have in mind that different manufacturers of laptops can have their own variation of the specifications such as frequencies and power usage, so performance results may vary a bit from a laptop to a laptop, even though they may have the same RTX 30 series GPU inside. 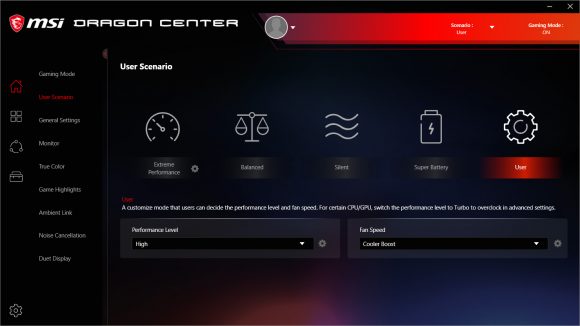 It is important not only to have good cooling solution such as the Cooler Boost Trinity+ from MSI, but also to have user control over the cooling fans and not to run them in automatic mode as far as crypto mining use is concerned. The MSI Cooler Boost Trinity+ tech is essentially consisting of three cooling fans with very thin blades and 7 heatpipes that are used to lead the heat away from the chassis of the laptop effectively and fast, so that the components inside can run cool… even when mining. Unfortunately, the MSI Afterburner software for overclocking and monitoring GPUs does not have a fan control support for this particular laptop, though you can still overclock the GPU and video memory.

The good news is that using the MSI Dragon Center software that comes with the laptop can provide you with the needed control over the cooling fans’ speed in the gaming laptop and what you would probably want to use for mining is the Cooler Boost mode. This mode just runs the fans at maximum speed all the time and is a bit noisy compared to the automatic fan control, but it is effectively keeping the operating temperatures low and this is what you need. Via the software you can also make a fan operation curve if you wish to, though it is recommended to run the fans at maximum and get the lowest possible operating temperature when crypto mining, especially when using a laptop. 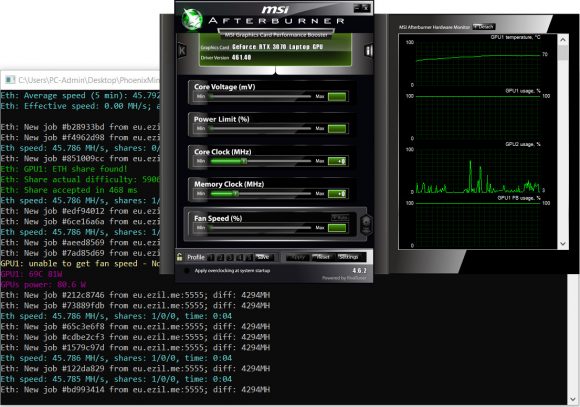 The MSI GS66 Stealth gaming laptop with its Nvidia GeForce RTX 3070 Laptop GPU inside is capable of delivering around 45.8 MH/s hashrate mining Ethereum (ETH) with the default out of the box settings with about 81W of power usage for the GPU with PhoenixMiner. This is lower than the 50-51 MH/s hashrate you can expect to get from stock settings on a desktop RTX 3070 video card, but the power usage here is also much lower – more than two times for just about 10% lower hashrate. With the default settings that include automatic fan control the operating temperature of the GPU while mining is pretty high – it is kept at around 70 degrees Celsius. This is a bit high for 24/7 mining, so we would like to avoid having such high temperature. Even though the GPU will still function properly for a while the concern is more for the other components in the cramped-up space that is the chassis of the laptop.

What you can do to help lower the operating temperature more is to turn up the cooling fans to the maximum or at least optimize the default cooling operation from the MSI Dragon Center software that was already mentioned is bundled with your MSI laptop. Going for the Cooler Boost option in the fans control settings everything can get much better with the temperature dropping down about 10 degrees down to around 60 Celsius. This is much better for 24/7 mining operation though still slightly more than we would normally settle for operating temperature for a desktop GPU used for mining. Further lowering with 2-3 degrees Celsius is possible if you just rise the back of the laptop a bit from the desk surface as it allows for better airflow. 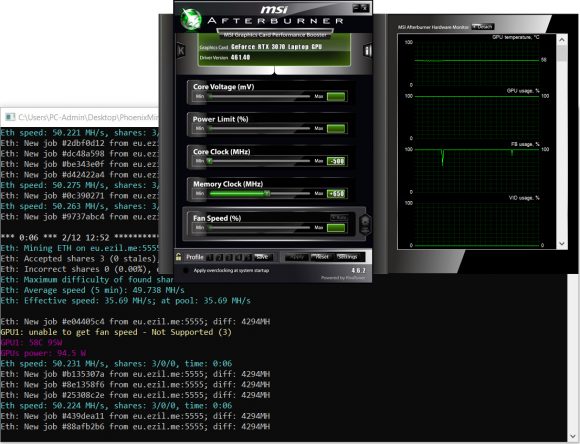 With RTX 3070 Laptop GPUs you cannot lower the power usage as it is already very optimized, you can get it a bit higher in order to increase the performance by overclocking the video card. As with desktop GeForce RTX 3070 GPUs what you need is to increase the video memory in order to get higher hashrate, there is not that much point in overclocking the GPU as your power limit is 95W and you cannot go past it. The GPU already runs at a lower operating frequency, though you still might be able to downclock it a bit more without losing any performance in terms of Ethereum mining hashrate.

The interesting thing is that even at -500 MHz the GPU retains its ETH mining performance for it to still push 50 MH/s hashrate, though you still need to push up the video memory with +650 MHz from MSI Afterburner for the extra megahashes. Unfortunately going higher and the GPU starting to freeze with black screen, so no way to get up to +1100 MHz like we normally go for with desktop RTX 30 series of GPUs. Remember that the stock memory frequency of the RTX 3070 Laptop GPU is also lower than the default for its desktop counterpart, and you also cannot clock it as much. So, the optimized settings give us a bit over 50 MH/s hashrate with about 95W of power usage which is close to the standard out of the box mining performance of the desktop RTX 3070 GPU, but still at over half the power usage here for the Laptop GPU.

This most important question is if it is worth getting a gaming laptop for crypto mining Ethereum (ETH). Most people will tell you – NO, but you can easily answer it yourself if you check a mining profitability calculator with the performance data you have available for the MSI GS66 Stealth gaming laptop and the RTX 3070 Laptop GPU. Going for the Whattomine website with 50 MH/s Ethash hashrate and 140W of total power usage for the laptop results in about $5.5-$6.5 USD profit at the moment per Day or about $180 USD per Month. You can consider trying Dual-Mining Ethereum (ETH) and Zilliqa (ZIL) for increasing the profitability a bit more thanks to the extra ZIL coins you will be mining. As for the price of the MSI gaming laptop with RTX 3070 GPU, it is currently around $2400 USD, so a little over a year of non-stop mining for the laptop to pay itself back if the mining profitability remains the same as it currently is (not very likely).

The idea here is not to start building a mining farm out of gaming laptops, this is just not that wise no matter how you look at it. Better stick for building mining rigs with desktop GPUs for crypto mining. You can however take the opportunity and get to buy yourself an expensive gaming laptop that you may otherwise not be able to afford and let it pay for itself over time. This way you can use the laptop for gaming, work or whatever and when you are not using it to just leave it mining Ethereum. Just make sure you have it properly cooled and optimally working at all times, monitoring the operating temperature and never and really NEVER use the CPU as well for mining along with the GPU! Intel’s CPUs get really hot and will also heat up the cooler and other components leading to a much higher chance of issues with the laptop if it is running like that for 24/7, so avoid at all costs and stick to the GPU mining if you will.

How to get instant e-PAN free of cost?