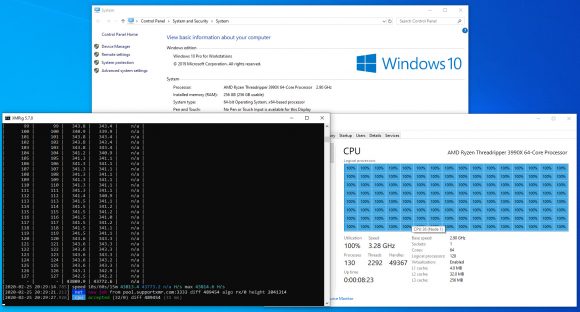 AMD’s Ryzen Threadripper 3990X Processor is the latest and highest-end workstation CPU from AMD offering staggering 64 cores and 128 logical threads to the user or with other words really massive performance if you can manage to take advantage. The Ryzen Threadripper 3990X CPU does not come cheap at a retail price of about $3990 USD it is really expensive, so most definitely not for everyone and unfortunately not the best choice for mining if you want to pay back for it mining crypto at the moment. Nevertheless we managed to get our hands on one of these monsters of CPU power and the first thing we did was to run some RandomX CPU benchmarks in order to see what level of performance we are going to get. You can read our first impressions and results below…

We have started our RandomX testing on the AMD Ryzen Threadripper 3990X CPU with the latest XMRig 5.7.0 that was just recently released and we managed to get all 128 threads at 100% and a hashrate of almost 40 KH/s. Performance wise great result, but still earning you just about 3 and something US dollars per day mining Monero (XMR) that uses the RandomX algorithm, making it pretty pointless to use that particular processor for mining. Mining ARQma (RandomARQ) got us 198 KH/s hashrate, for LOKI (RandomXL) the hashrate was 46.6 KH/s and for WOWnero (RandomWOW) the result was 49.1 KH/s when using the latest XMRig miner. Tryign out the latest XMR-Stak-RX got us a bit higher hashrate at 41.3 KH/s for RandomX and the latest SRBMiner-Multi miner did perform even slightly better with 41.8 KH/s as hashrate mining Monero (XMR).

All of the miners for RandomX did manage to properly load all of the available 128 logical cores on the 3990X processor, but be aware that not all CPU miners out there and all algorithms may be able to take full advantage of so many CPU threads for mining. An example of a miner that had trouble automatically using all 128 threads is the PEGNet (PEG) miner at the Orax Pool that did put a load on only half the logical threads available or with other words only 64 threads instead of the full 128. Trying to manually fix the issue by increasing the number of sub miners to 128 from the automatically detected 64 unfortunately does not help to take full advantage of all 128 logical cores that the processor offers.