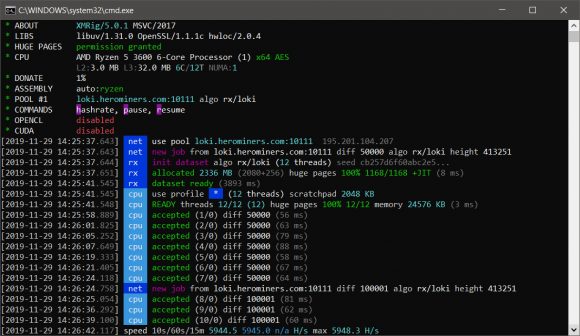 With the upcoming Monero (XMR) hardfork to the RandomX algo in a day now, we are checking what is the current profitability of crypto coins that are already using the RandomX algorithm or a variant of it on a decent performing AMD CPU that offers great price/performance. For the tests we are using an AMD Ryzen 5 3600 processor that is 6 Core – 12 Threads with a base clock of 3.6 GHz and max boost clock of up to 4.2 GHz running at stock settings on a B450 motherboard with 8GB 3200 MHz DDR4 memory. The hashrates below are from the latest XMRig 5.0.1 and the algorithms tested are RandomARQ (RandomX variant for ArQmA), RandomWOW (RandomX variant for Wownero) and RandomXL (RandomX variant for Loki) and tomorrow we would be able to see profit results from Monero’s new RandomX algorithm after the fork as well…

As you can see even though the performance in terms of H/s is quite good, the profitability of a single Ryzen 3600 CPU is far from great and when you consider that the power usage of a system with that processor is about 130-150W you get let us say 3.6 KW per day with cheap $0.1 USD per KW/h for the electricity that results in $0.36 electricity cost. The only coin and algorithm that is currently above the electricity cost is LOKI and you won’t actually be making much, just paying for the cost of the CPU can take quite some time and here we are all hoping that after the fork of Monero things will be looking better for miners with CPUs. Intel CPU owners might be mostly interested in ArQmA (ARQ) as the variation of the RandomX algorithm it uses performs much better on Intel compared to the version from LOKI or Wownero that are significantly faster on AMD Ryzen.

Millennials are the Only Thing Saving the U.S. Housing Market From Crashing