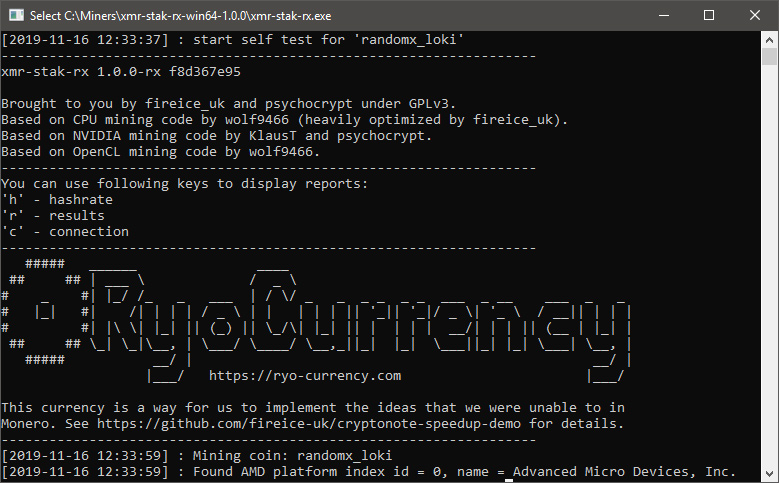 The developer of the XMR-Stak miner has released XMR-STAK-RX 1.0.0, a new miner supporting only the RandomX algorithm and its variants for CPU miners and with no development fee built in. The miner is available for both Linux and Windows as pre-compiled binaries. This is definitely good news for anyone interested in the nearing Monero (XMR) hardfork to RandomX at the end of he month or any of the other altcoins that have switched to RandomX variants or are planning to do so after XMR forks.

Now there is one more option for miners to choose from regarding RandomX support, besides XMR-STAK-RX there is the first one with RandomX support XMRig as well as the more recent also new miner SRBMiner-Multi. Just like XMRig does come with GPU support for RandomX, XMR-Stak also supports GPU mining, however considering that RandomX is optimized for CPUs that is not much of advantage as even high-end video cards perform similar to the low-end processors with much higher power usage, making GPU mining RandomX pretty pointless for the moment.

Do note for the moment that XMR-STAK-RX 1.0.0 supports only RandomX, RandomX Loki and RandomX WOW, no support for the Random ARQ algorithm used by ArQmA (ARQ), so you have to sue any of the other two miners for that one. Performance wise XMR-STAK-RX 1.0.0 does seem to be about 1000 H/s slower compared to the other two alternatives at the moment running on AMD Ryzen 3600 CPU (on RandomX and RandomX Loki, RandomX WoW is better), so there is more to be desired in terms of updates regarding hashrate. Regarding performance on Intel CPUs, our test on an Intel Core i7 6850K has shown pretty much the same low performance with XMR-STAK-RX as with the other miners, so apparently AMD support might need some more optimizations for best performance.

– To download and try the newly released XMR-STAK-RX 1.0.0 for RandomX mining…