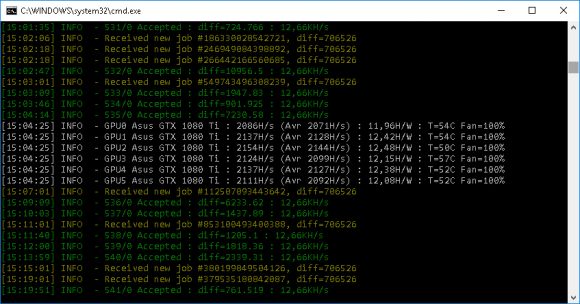 This is an interesting project that is still largely flying under the radar, even though it was started back in 2018. With a sub $300 USD market cap and surprisingly low trading volume due to limited exchanges trading the coin it is not surprise it is not getting the needed attention it deserves. Ryo Currency (RYO) is another interesting attempt at a privacy oriented crypto currency with the project led by fireice_uk and psychocrypt, who are the developers of the xmr-stak mining software and the Cryptonight-Heavy algorithm, although the project currently relies on the first in industry floating point (FP32 math ops) mining algo Cryptonight-GPU. The main idea of the Cryptonight-GPU (CN-GPU) algorithm is to ensure fair GPU mining to all participants in the mining process, regardless if they use AMD or Nvidia GPUs.

Originally most CryptoNight-based algorithms are favoring AMD GPUs and manage to perform better on lower-end AMD GPUs than on higher-end Nvidia GPUs thus not crating the equality needed for fair mining. The Cryptonight-GPU algorithm however manages to offer pretty good equality for both AMD and Nvidia lineups of GPUs, scaling performance from low-end to high-end GPUs regardless if they are AMD or Nvidia ones. This means that if you have a AMD Radeon RX 580 it will not be twice as fast as an Nvidia GTX 1080 Ti as in some CN-based algorithms, instead the Nvidia GPU will be more than twice faster as it is a higher-end product than the specific AMD card. This means that you might actually be interested in mining RYO not only with AMD GPUs, but with Nvidia as well and the higher-end the GPU is, the better performance you will be getting.

It is interesting to note that RYO’s block reward changes every 6-months according to a specific scheme and it is still growing, expecting to reach its peak near the end of this year (mid-November) and then it will start dropping down steadily. The current block reward for RYO is 56.28 coins per block and it will max out at 65.07 RYO for two 6-month cycles before starting to go down again every 6 months. RYO and Cryptonight-GPU can be mined with XMR-Stak, XMRig and SRBMiner – the most popular AMD CryptoNight miners as well as with CryptoDredge for Nvidia GPUs for best performance. There are number of mining pools available with MinerRocks being the largest one at the moment in terms of hashrate.