The weekend has been largely one of consolidation for crypto markets as Bitcoin has held on to gains to keep it in five figures. Monday morning, however, has seen some bigger moves on altcoin prices as they outperform their big brother in a rare upswing.

Most of 2019 has seen the altcoins take beating after beating as their big brother surged. They are not as low as their depths in mid-December last year when doom shrouded the space, but many have not really recovered yet.

Today’s action is nowhere near recovery as the majority of them are still over 80 percent down from their all-time highs, but it may be a ray of hope. Total crypto market capitalization has increased by $15 billion over the past 24 hours as it chases $280 billion again. 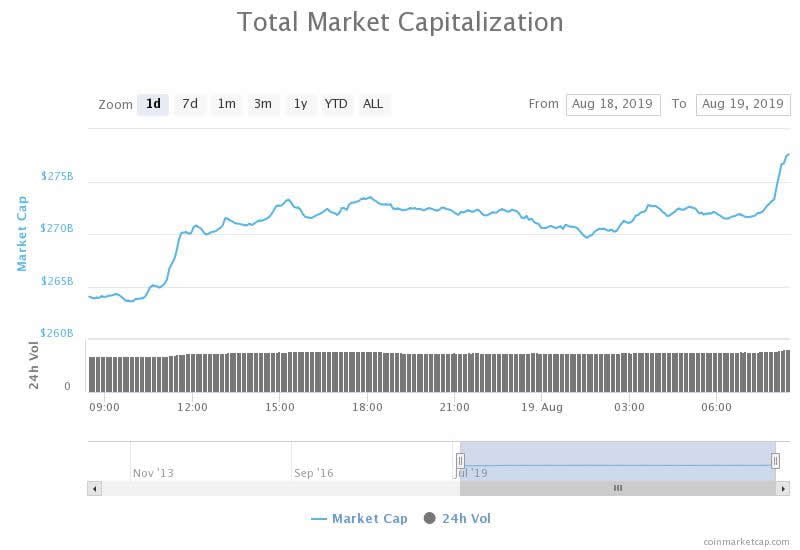 Bitcoin has made a move through resistance a few hours ago but the altcoins are also on a charge at the moment. From a low of below $185 yesterday, Ethereum has cranked 8 percent to reach the psychological $200 level once again. Crypto trader ‘Nico’ has noted the breakout adding that further longs will be likely if the $200 level can be breached.

“Nice breakout after a short test of the 175$ level with HL sequence & a pennant (that was bearish) but ended breaking to the upside… Currently testing the ~200$ resistance level, if flipped  into support, we can start thinking about a long setup…”

Currently testing the ~200$ resistance level, if flipped into support, we can start thinking about a long setup…#ETH pic.twitter.com/Fukje2xCl1

Ripple’s XRP token has also made a rare surge adding 8 percent today to reach $0.287 however it really needs to get back to the $0.30 level and hold above it to register further upsides.

Bitcoin Cash has mirrored its big brother with a 5 percent gain to top $320 but Litecoin has done marginally better, adding around 7.5 percent as LTC closes down on $80 once again. Rounding out the top ten are EOS, BSV and Monero, all making 6-7 percent on the day.

Other altcoins performing well at the time of writing include Cardano, Tron, Dogecoin and Qtum. Finally the alts are contributing something to total crypto market cap but the gains are not all theirs.

A few hours ago during Asian trading Bitcoin also broke through resistance to top $10,700, its highest level for almost a week. The next resistance point for BTC is around $10,800, then all is clear all the way up to $11,400. Markets are all in the green this Monday morning and the altcoins are finally getting a little crypto love.

Elizabeth Warren Schemes to Take Down Trump in the 2020 Presidential Election, Does She Even Stand a Chance?

Changing the Dynamics of Social Media with Blockchain Technology