Crypto markets have reached their highest level since July 2018 in terms of market capitalization. The momentum has come from Bitcoin hitting another 2019 top, and Ripple’s XRP pumping on a new partnership announcement.

Bitcoin has been grinding higher for the past 24 hours until it topped $9,400 briefly marking its highest price since early May 2018. There is heavy resistance above this and BTC quickly started to retreat back to the $9,200 area where it was trading this time yesterday. According to coinmarketcap.com daily volume dumped 25% in an unnatural looking spike so the figures could be spurious.

Ethereum has been static again and remains at $270 where it was this time yesterday. Without any solid fundamentals ETH remains sluggish and unable to push towards $300. It is still 80 percent down from its all-time high and ‘altseason’ has yet to materialize.

The top ten is a mixed affair during Asian trading today but the top performer is XRP. The Ripple token surged 9 percent after the announcement that the company was partnering with MoneyGram. The deal would involve the deployment of xRapid for cross border transfers using XRP. After topping $0.46 XRP corrected to $0.44 where it currently trades.

An industry defining milestone: together, @MoneyGram and @Ripple are solving the challenges with cross-border payments using the speed and efficiency of #XRP. https://t.co/xIfeJJgSy7

Binance Coin is also doing well today adding 5 percent as the exchange announced that it will issue a number of crypto-pegged tokens on Binance Chain in the coming days, starting with $BTCB, a BEP2 token pegged to $BTC. BSV is up marginally and Litecoin is starting its pullback, dropping 3 percent back towards $130.

The top twenty is also mixed but red is dominating over green as altcoins slide again. NEO and Tezos are dumping 5 percent a piece right now and IOTA and NEM are not far behind dropping 3 percent. Only Cosmos is making anything with 3 percent added on the day.

Today’s top one hundred top performer is LINK which has cranked 18 percent to hit $2. The fomo is still lingering from the Google Cloud tie up as this altcoin climbs the charts to 24th with a market cap of $700 million. Japan’s Monacoin is also on a roll today adding 15 percent, unsurprisingly most of it on Bitbank in JPY. Zcash is the third most popular altcoin today making 13 percent.

The two usual suspects are at the bottom end of the performance pile, Maximine Coin and Aurora. 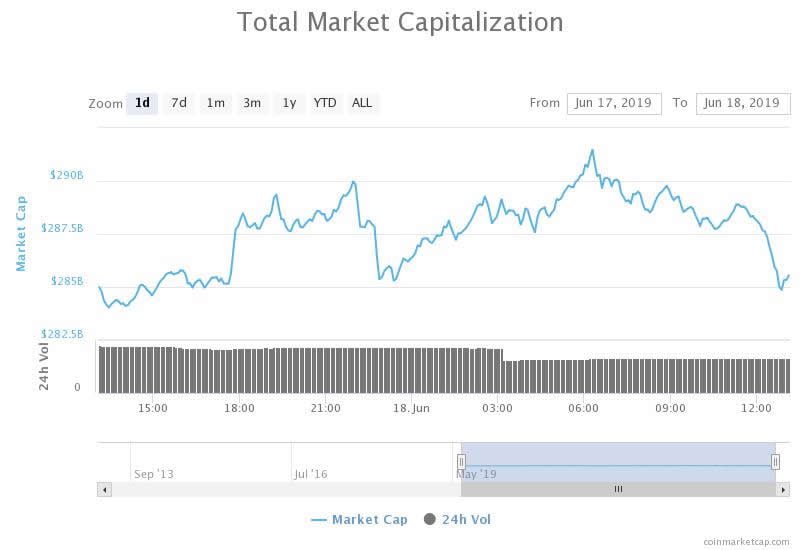 Total crypto market cap hit a new 2019 high of $290 billion a few hours ago. The move was driven by BTC and XRP which both pumped within a few hours of each other. Market cap is currently back at $286 billion where it was this time yesterday. BTC is still in the driving seat.

Market Wrap is a section that takes a daily look at the top cryptocurrencies during the current trading session and analyses the best-performing ones, looking for trends and possible fundamentals.