Coordicide dominates in IOTA Forums. Upon test and implementation, the platform will trailblaze within the IoT landscape. Meanwhile, IOTA is stable but down the liquidity rankings.

The IOTA community is jubilant because of Coordicide. Consensus among critics and supporters is that the transaction validator, in Coordinator, is indeed a central point of failure. Its downtime can severely cripple IOTA’s ecosystem.

In a new white paper explaining how the blockless IOTA, meeting the needs of a feeless and real-time IoT ecosystem, will implement a solution, the team highlighted the need for patience.

Although supporters describe the final activation as game-changing, rewarding, and setting apart IOTA’s excellence in research, the exact date will remain tentative. That is until tests confirming that the option operates as designed.

Most importantly, initial tests must without a shadow of doubt demonstrate that the network is secure with sync in consensus, peering, discovering, and accountability of nodes. Once these tests are satisfactory, the mainnet will launch.

“Proposed ideas need to be simulated and tested to develop specific network components which we feel confident to deploy on the main network. We stress that some of the ideas presented here are works in progress and as such are not fully fleshed out. They are therefore likely to be modified as we make progress and perform simulations.” 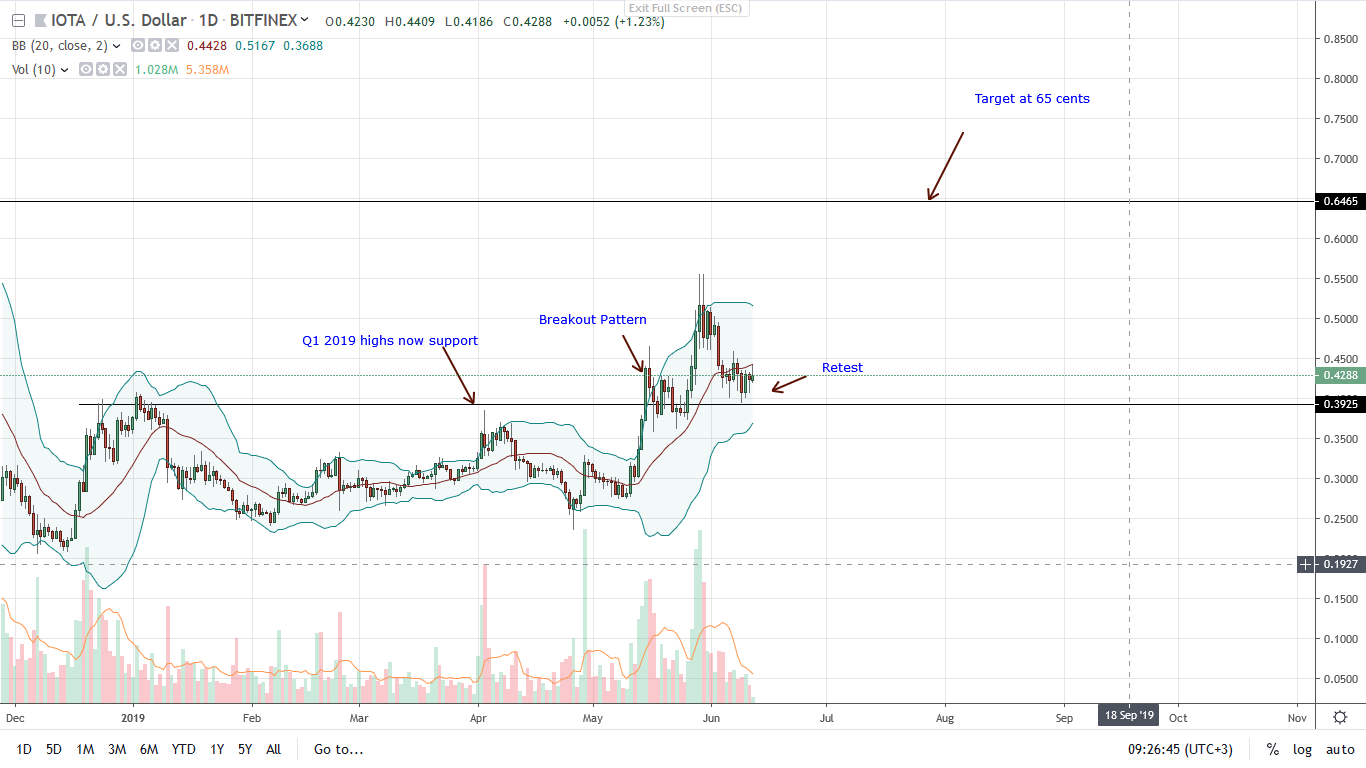 Down to 17th, IOTA is stable in the daily and weekly chart, respectively. Even though the digital asset is trading within a bullish breakout pattern after convincingly closing above Q1 2019 highs-now support, bulls are struggling to rekindle initial momentum.

From the chart, IOT is at the early stages of a trend resumption phase after selloff of May 30th and the confirmation of June 3rd. As a result of the above, the best cause of action is for aggressive traders to load on dips.

Alternatively, conservative traders can wait for a complete reversal of May 30th losses. Therefore, that means upon clearance of May high, traders can comfortably buy the dips while aiming at 65 cents or higher.

In light of the above, May 30th and June 3rd candlesticks anchor this trade plan. The success of IOTA bulls largely depends on the strength of the underlying momentum.

If the breakout above 55 cents or May high is with high participation exceeding 22 million, odds are bulls will rally to 65 cents or beyond. Conversely, losses below 40 cents could see IOTA tumble to 25 cents or lower.

The post IOTA Is Down The Liquidity Rankings Despite The Promise of Coordicide appeared first on NewsBTC.