After two months of higher lows and higher highs, BTC bulls are exhausted. In the last day, the asset is down 6.1 percent. As bears press lower, it is likely that prices will crumble to $7,500 or worse in an inevitable correction.

There is a market-wide price dump, and understandably so, Bitcoin is undergoing a correction. Like most high liquid crypto assets, BTC is registering losses. Earlier today, the world’s most valuable asset fell, shedding 6.1 percent. The flash dump saw BTC lose $700 in roughly two hours.

Accompanying this price recalibration was a spike in trading volumes. Although market participants are technically bullish in expecting BTC to shake off sellers, the uptick in participation countering the main trend reeks of weakness.

Because of this, BTC may crumble, hurting traders with lofty targets that are eyeing the key $10,000 level. But then, according to Mike Novogratz and several analysts who have looked to dropping trading volumes and Bitcoin’s consolidation potential, today’s retracement reaffirms their doubts.

As a result of this, the odds are, many will end up their long positions in a panic, therefore withdrawing liquidity and fracturing the market. 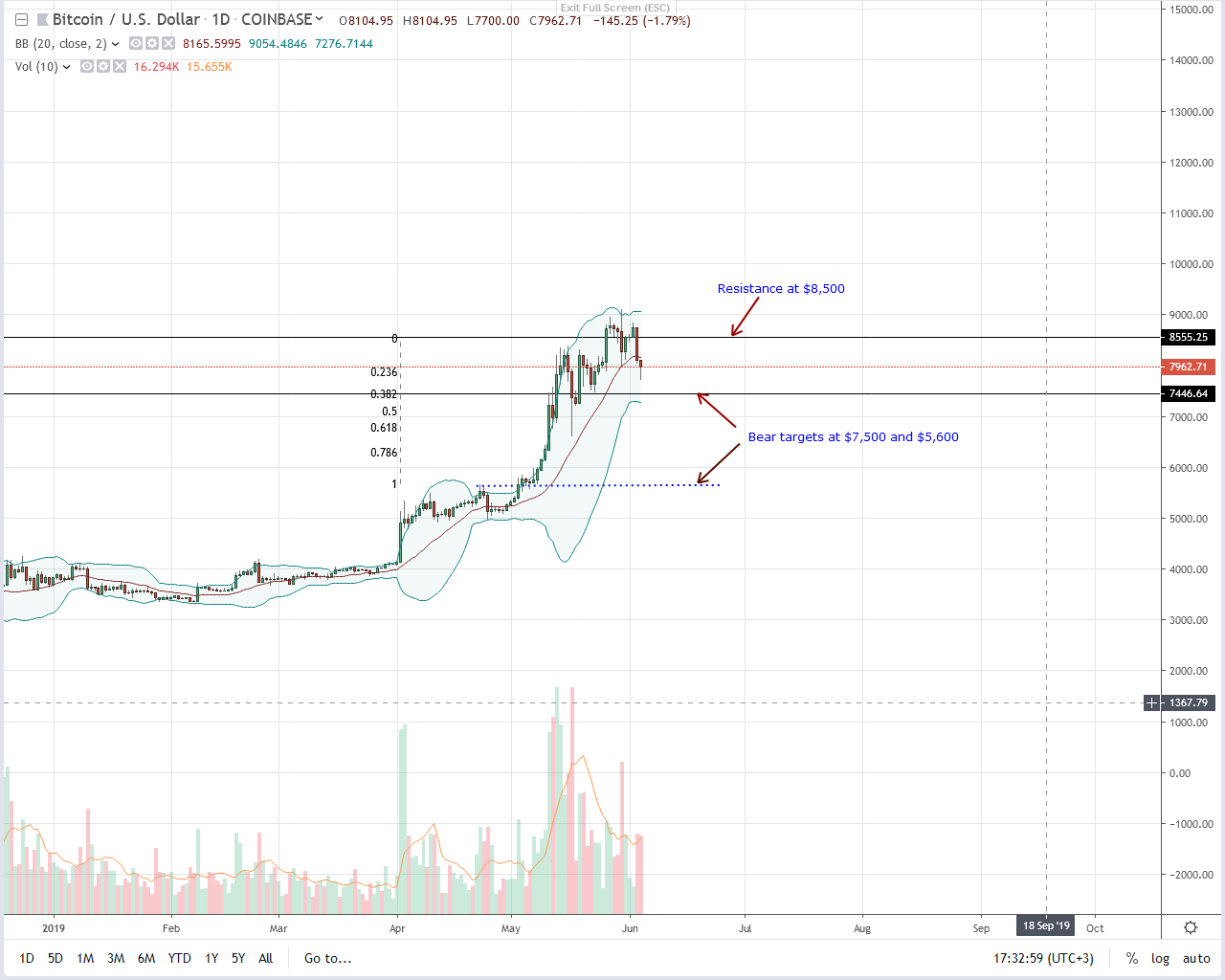 At the time of press, Bitcoin (BTC) is changing hands below the $8,000 mark. Meanwhile, prices are down 6.1 percent from yesterday’s close. Although traders are optimistic, it appears as if bears are back in full force. Accompanying yesterday’s loss were high trading volumes. Furthermore, yesterday’s candle was wide-ranging with the resulting candlestick closing below the middle Bollinger Band (BB).

For the last few months, the middle Bollinger Band (BB) was flexible support. As such, this breach could dent buyers’ momentum following a consolidation below $8,500 in the previous week of May.

Besides, traders should also note that the June 3rd candle did, in part, confirm the selloff on May 30th. Therefore, in a bear confirmation, yesterday’s drawdown will likely trigger a correction towards $7,500, $6,600, and potentially even worse, the $5,600 range in a bearish retrace.

In light of the above, May 30th bear candle anchors this trade plan. As mentioned above, it is broad and it from there that BTC prices are oscillating in. Apart from that, the bar has high trading volumes of 31k against 19k of May 26thand yesterday’s 16k reading.

Since BTC is correcting, any drop below $7,500 or surge above $8,500 should preferably be at the back of high trading volumes exceeding 31k of May 30th.

The post Bitcoin Buyers Exhausted: Is This a Pause Before the $10,000 Push? appeared first on NewsBTC.

Vikings vs. Eagles: 3 Matchups That Will Decide This Pivotal Game

3 Reasons Why Bitcoin Price Will Rebound in Q2 2018

Bitcoin Back to $8,250, Ethereum and ERC20 Tokens Secure Momentum