Siam Commercial Bank (SCB) will pioneer Ripple’s Multi-hop feature, although the public will wait for further announcement on whether the bank will utilize XRP in their future transactions. Meanwhile, XRP is ranging, adding 3.2 percent from May 23rd close.

For any cryptocurrency project to be successful, it must partner with companies, finding use cases in the process. That is what many have disclosed in their white papers, and Ripple is no exception.

Described as a banker’s coin, XRP is the medium of exchange for such interactions. It is liquid and highly capitalized, attracting investors and speculators in the process. Nonetheless, Ripple is struggling to draw banks. With SWIFT retaining the lion’s share of global bank transfers, it will take a lot of convincing and proof before a large-scale migration happen.

Presently, most banks plugged to the RippleNet make use of xCurrent. The XRP community was excited, expecting Thailand’s oldest bank, Siam Commercial Bank (SCB), to announce their adoption of xRapid. But in a tweet, they said the public has to “wait for further announcement.” All the same, the bank will pioneer Ripple’s multi-hop feature: 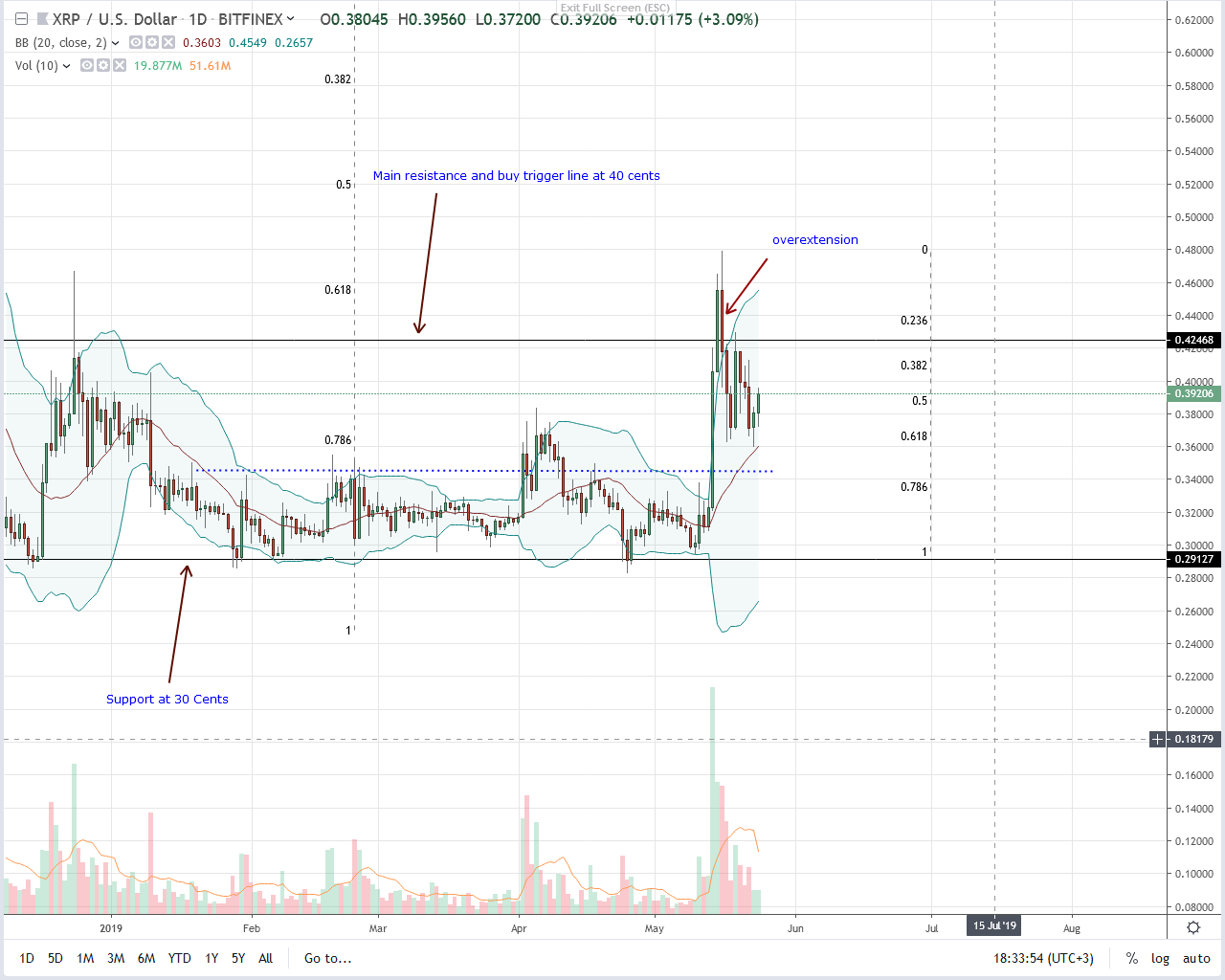 At the time of press, XRP is up to 6.1 percent in 24 hours. The asset is ranging, oscillating below 40 cents.  Because of this, previous XRP/USD trade plans are valid. As it is, aggressive traders can find opportunity in smaller times. That is where they can buy on dips with the first target at 43 cents since the trend is bullish and XRP is within a breakout pattern.

However, for trend continuation, it is imperative that buyers build momentum and drive prices above the liquidation level at 43 cents. The resulting upthrust will allow bulls of early April and May to show in the process aligning prices to the main trend of September 2018.

On the reverse side, this breakout pattern will be null if prices fall below 34 cents.

From the chart, XRP is ranging against the USD and May 19th anchors our trade plan. The bar’s trade range is extensive and is equally backed by high trading volumes of 56 million against 68 million. Since bulls are in control, any uptick in participation, driving prices above 43 cents must be above 56 million or 187 million.

Freelancers, Attention: “Bitcoin” Is The Most Valuable Skill

‘A Financial Bubble and a Ponzi’: Russian Bishop Castigates Cryptocurrencies