Ripple’s XRP token is among the worst best-performing cryptocurrency in the top ten. The coin has returned a mere 4.44 percent profits to its investors in the last 90 days. And those who purchased it 30-days back are looking at 18.45 percent losses already. But that has not deterred traders from speculating on it, proves the last 24 hours.

The XRP price gained as much as 4.5 percent value against the dollar in the said period. It touched a session high towards $0.344 at about 0400 UTC and corrected towards $0.377 at the time of this writing. The interim bullish sentiment helped XRP improve its weekly performance surge to 1.88 percent in the positive territory. Before the rally, the same performance was trending in deep red. 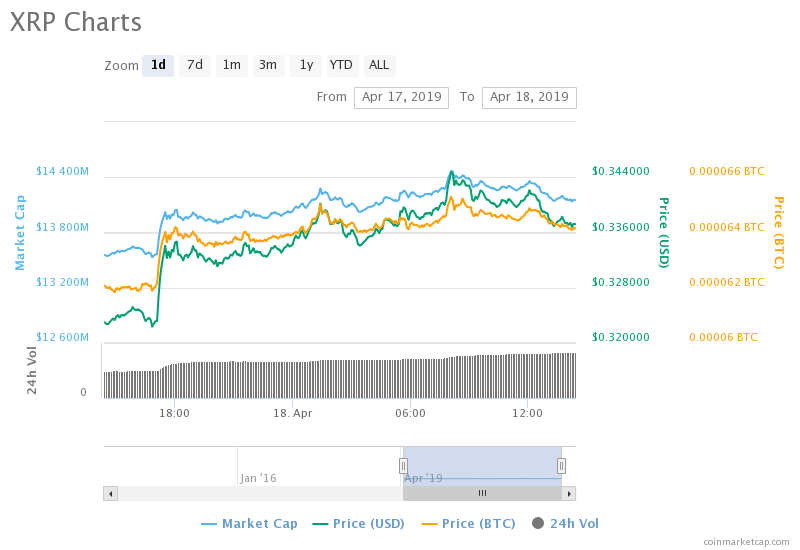 XRP Price is Returning to Green After a Week | Source: CMC

The XRP price also surged about 3.75 percent against bitcoin, the leading cryptocurrency, indicating that traders preferred to buy XRP for a discounted value when bitcoin was stuck in a strict trading range. That doesn’t take away the fact that XRP could not sustain its double-digit gains following the so-called April Fools’ rally this month. Traders switched their XRP units for better bullish alternatives such as Bitcoin Cash (BCH) and Litecoin (LTC).

Fundamentally, things are always looking stronger for Ripple Labs, the company behind the XRP tokens issuance. But as far as the interim sentiment goes, the San Francisco firm did not reveal any positive market-pushing news that could explain the XRP-surge. There was, however, a rumor that might have prompted traders to purchase XRP. On April 16, Weiss Ratings alleged that Skype was preparing to integrate XRP tipping options in its voice and video messaging platform.

“XRP may soon get integrated into Skype, picking up access to 300 million users for their XRP tip bot app to send messages to users,” the agency tweeted. “XRP TipBot already can be used with Outlook, Reddit, Twitter, Gmail.”

#XRP may soon get integrated into #Skype, picking up access to 300 million users for their XRP #TipBot app to send messages to users. XRP TipBot already can be used with #Outlook, #Reddit, #Twitter, #Gmail. #moreAdoption

The rumor notably injected confidence into the falling XRP market. The coin’s price surged 3.55 percent on April 16, and another 6.67 percent the next day. As of now, the XRP market is more in a correction mode. 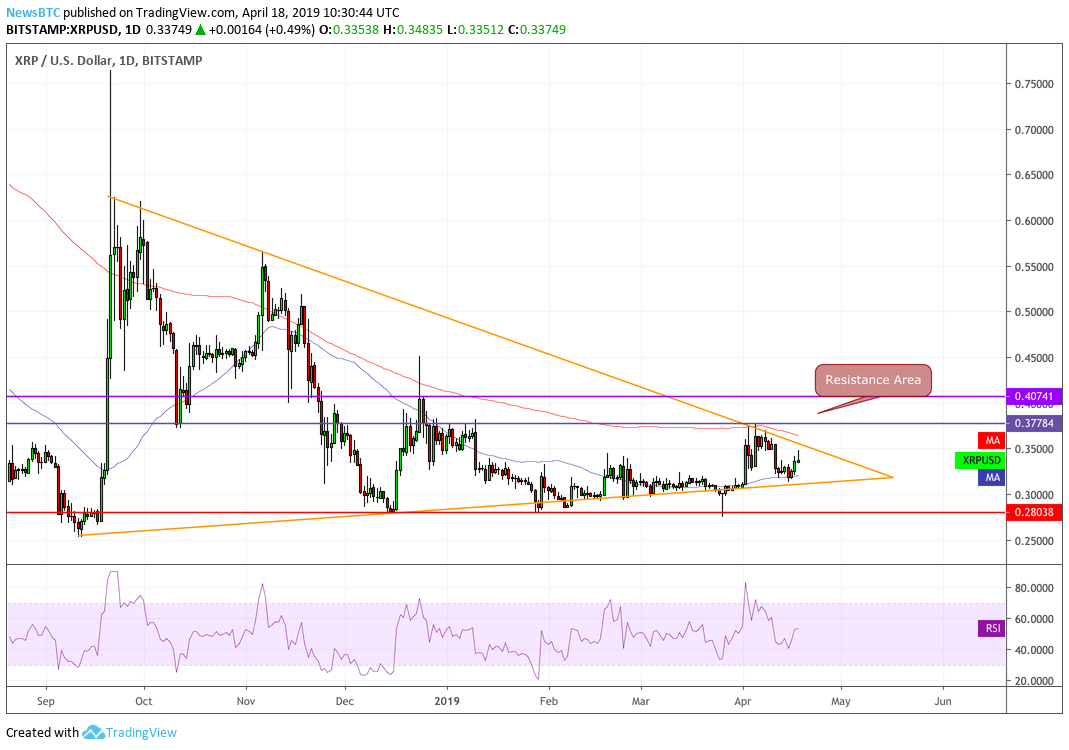 The XRP price is trending inside a descending triangle since October last year. The coin has justed pulled back after testing a key support area and is now looking to establish a session high towards the triangle resistance. As XRP heads towards the apex of this triangle, the likelihood of a breakout will be higher. A bullish breakout would have XRP target $0.377-0.407 while a bearish breakout would set XRP towards 0.280.

That said, XRP is not out of its bearish sentiment yet.

The post Ripple (XRP) Jumps 4% After a Month-Long Bearish Action – What’s Next? appeared first on NewsBTC.

Cryptocurrency Mining Is Stopping Us From Finding Aliens, Critics Claim

Daplie and ClearCenter Partner to Bring the Blockchain into the Home