Mark Dow says Bitcoin (BTC) is buyable, and true to his word, it is. The coin is up 22 percent in the last week thanks to today’s upswing thrusting the asset above $4,500. With favorable candlestick arrangements, Bitcoin (BTC) will likely test $6,000 in short to medium term.

There is a transition and bulls are back. In 30 short minutes, Bitcoin (BTC) prices spiked to above $5,000 and, in the process, cleared $4,500, a significant resistance level. As it is, we expect this trend to continue, and there are supporting indicators. Not only are there humongous candlesticks in today’s hourly chart but major events indicate bullish sentiment. More analysts are joining the crypto buy train.

Case in point is Mark Dow, the former IMF economist who made money from the last Bitcoin rally of Q4 2017 and shorted the most valuable coin last year making upwards of $20 million. In his analysis, the economist recommends long, saying Bitcoin is “buyable” at current valuation.

Exiting his shorts, he said he’s “done and doesn’t to try to ride this (slide) to zero” and that “he doesn’t want to try to squeeze more out of the lemon.” At the moment, we cannot pinpoint the exact cause of this upswing but what we know is that there are sufficient volumes to sustain gains in short to medium term. 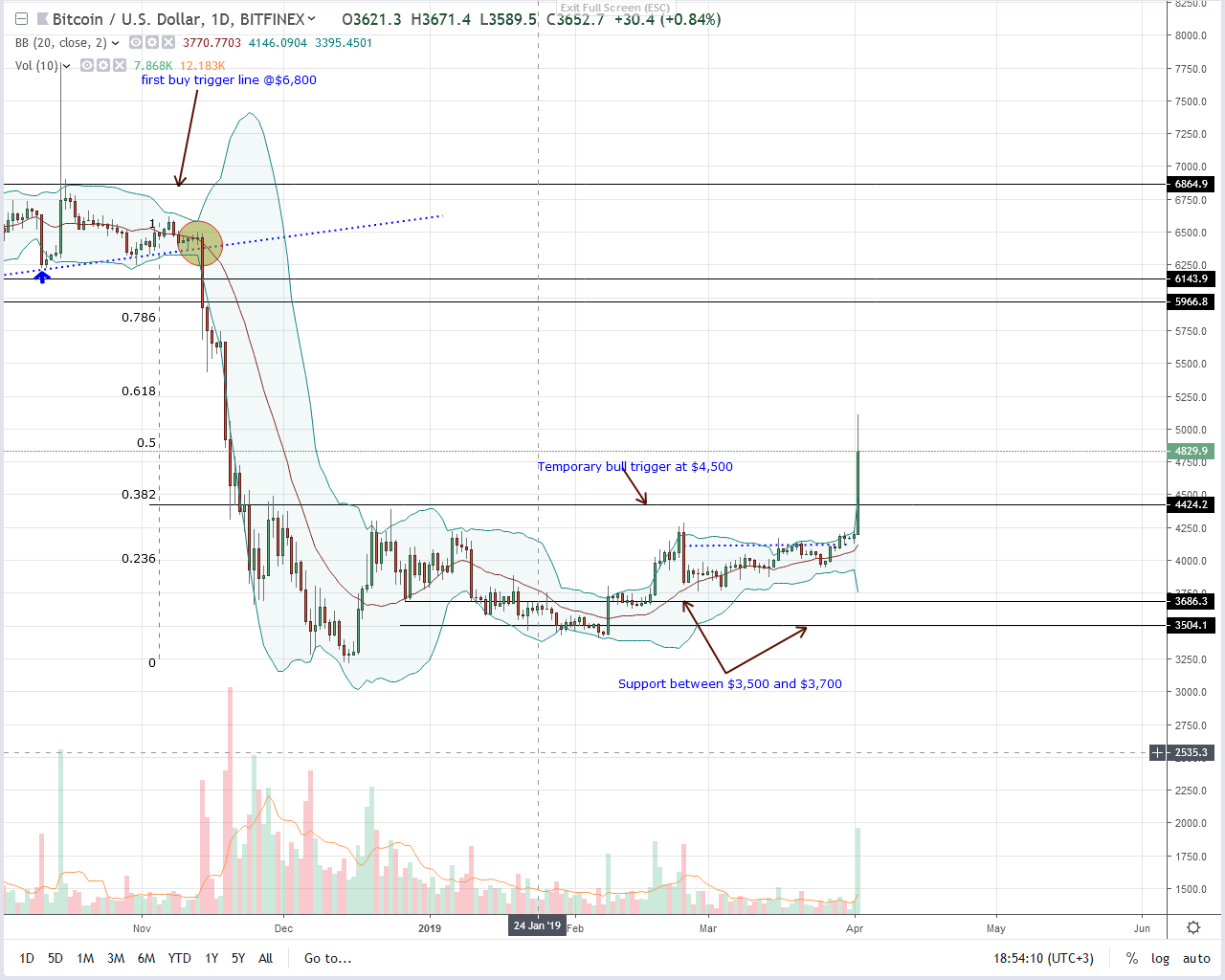 From the chart, it’s back to green for the world’s most valuable coin. Driven by participation and even FOMO, BTC is up 15 percent in the last day and 22 percent in the previous week as prices trend above $4,500 or the 38.2 percent Fibonacci retracement level of Q4 2018 depreciation.

As it is, our BTC/USD trade plan is live after today’s close above Q1 2019, $1,300 draining accumulation. Therefore, because of today’s trade range, we expect a short pullback which traders should capitalize with first targets at $5,800–$6,000.

With the market lighted, it is likely that volumes will keep rising up and as demand increase so will BTC prices, and the first reasonable target for bulls will be the breakout level at $5,800—which is previous support now resistance.

Like before, our anchor bar is Feb 24, a bear bar with high volumes—36k. Since prices are up trading above $4,500 with high transaction volumes above 40k—at the time of writing, our trade conditions are , and both sets of traders can begin ramping up as aforementioned.

Nvidia Made $289 Million from Cryptocurrency Mining in Q1