It’s all about adoption, and as Tron Foundation strike partners, BitTorrent is partnering with TronCard. Users will carefully spend their TRX spurring demand especially if the application is seamless. It is the necessary building blocks needed for TRX to rally from 2.3 cents to 6 cents.

For cryptocurrencies and digital assets to make waves, then coin expenditure is mandatory—not just holding. As rightful owners of BitTorrent, it is good news that TronCard is partnering with BitTorrent days after a successful ICO and consequent listing at various exchanges.

TronCard runs via Grid, a new concept designed specifically for prepaid cards. In this arrangement, a user receives a TronCard preloaded with TRX just like they would have a regular credit or debit card. However, unlike other cards, owners receive interest ranging between 2.5 percent and 3.5 percent of their total TRX holdings.

The card is technically a Tron wallet with a Poppy interface. As a result, TronCard is a simple yet powerful and versatile option for everyone promoting cryptocurrencies and their eventual adoption. With Grid—a product built on the Tron platform, integration, not only will users enjoy a smart wallet and anonymity, but there will be the comfort of using a secure wallet that is regular–but better– than the mainstream. 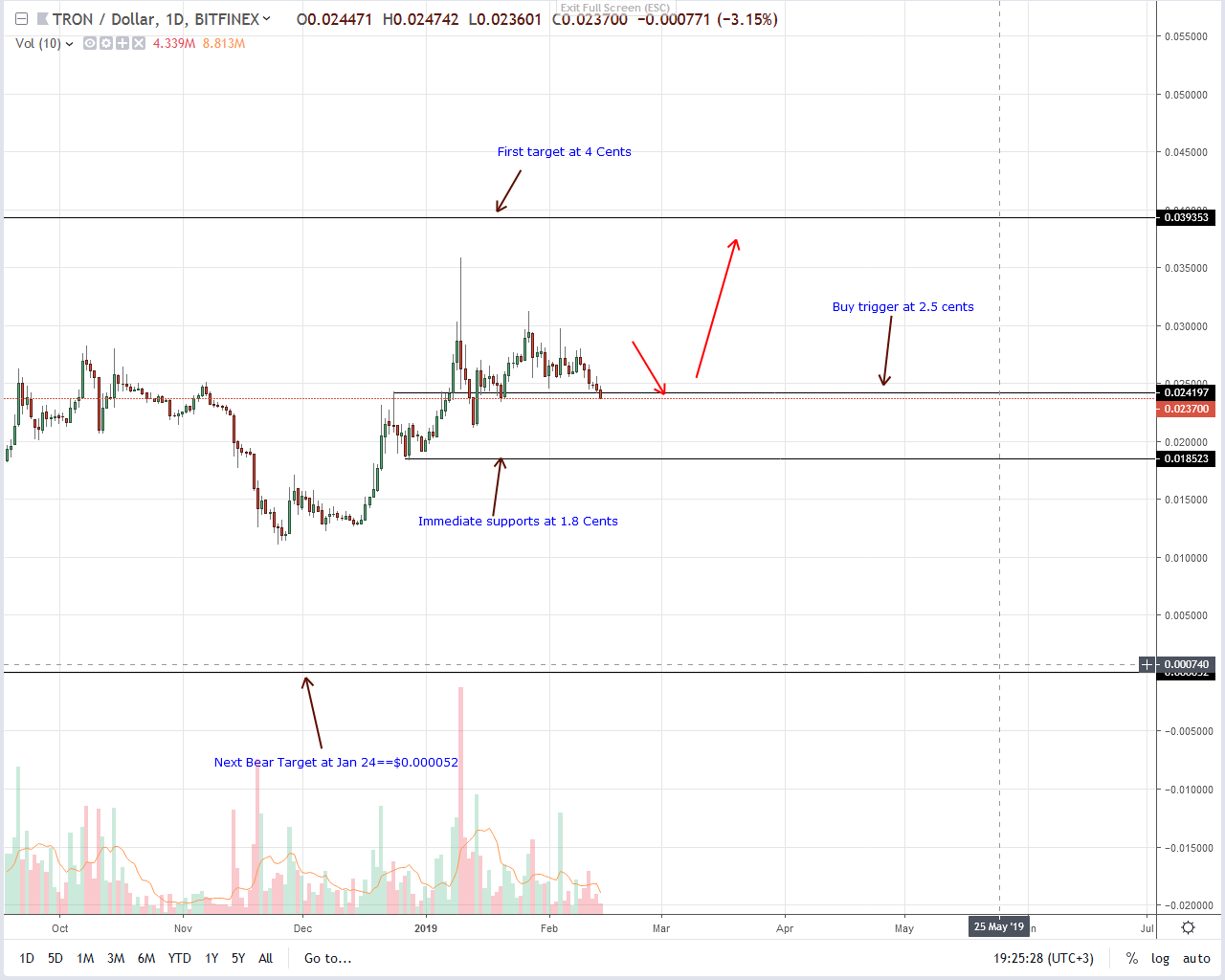 It is highly likely that TRX is re-calibrating and shaking off the pumping effect of late Jan 2019. At spot rates, the coin is changing hands at 2.3 cents and down 8.4 percent from last week’s close. Because of sellers pressing the gas pedal in the last few days, TRX prices are back to our main support line and could even break below the lows of the double bar bull reversal of Jan 20-21.

From our last TRX/USD trade plan, we said such an event could trigger losses towards 2.1 cents completely invalidating our overall bullish stance of TRX.

Ideally, what we want to see is a recovery above 3.1 cents—Jan 27 highs as bulls of late Dec and throughout Jan are confirmed. After that, it is likely that the bull breakout pattern of Jan 8 will hold as prices snap back to trend rallying above 4 cents and above 6 cents.

With every low, participation levels shrink—averages are down from 16 million of late Jan to around 8 million as registered on Feb 13. If anything, this is negative, and all that we need for bull trend resumption is an injection of buy demand pumping prices above 3.1 cents with high trade volumes exceeding 42 million of Feb 4.

Bitcoin, The Blockchain And The Future Of ‘Decentralized’ Conglomerates

Bitcoin Price at $10,000: Then Versus Now and Revisiting the Last Crypto Bubble